Addressing a meeting of the National Science Foundation at the agency headquarters in Alexandria, Va., in Feb. 2020

Current subjects on which I speak publicly:

Digital Manipulation and the Future of Electoral Democracy

How to Save Quality Journalism in the U.S?

Mind-Expansion: Past, Present and Future

Science, Engineering and the Cold War

Vannevar Bush and Science Advice to the President

How Technology is Transforming Africa? 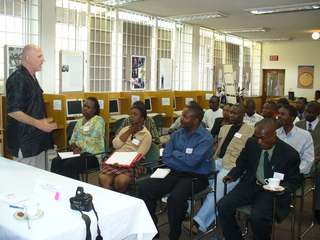 Zachary addresses a group of journalists in Lilongwe, Malawi

G. Pascal Zachary occasionally guest lectures at universities, knowledge enterprises and public institutions. In Febraury 2020, he delivered the keynote address at a historical conference sponsored by the National Science Foundation. In March, 2020, he visited the University of Nevada at Reno to teach and talk on literary journalism and reporting on complex techno-scientific stories, issues and trends. In 2019, Zachary gave a keynote address on the future of innovation at TechFest, in Portland.

In prior years, Zachary has lecturered in Kampala, Uganda; Accra, Ghana, and at the National University in Daejon, South Korea. In the U.S., he has lecturerd at the Smithsonian, Tufts, CalTech, the University of California at Berkeley, Stanford, Colorado College and the University of Puget Sound. In years past, he has given private talks at the Bill and Melinda Gates Foundation and Google.

From time to time Zachary comments on public affairs in the media. He's done radio interviews with BBC, Voice of America and Marketplace. He has co-directed and co-written several documentaries for public and commercial televsion, notably Code Rush, about communities of software programmers in Silicon Valley. The documentary aired nationally on the PBS network in 2000.