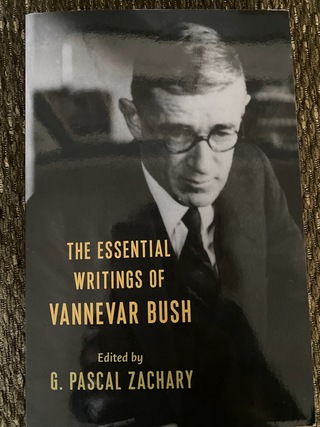 New from Columbia University Press (Feb 2022): Van Bush in his own words

New from G. Pascal Zachary, a companion volume to his acclaimed biography of Vannevar Bush.
Bush is best remembered as the organizer of the Manhattan Project, a visionary thinker on the future of information technology, the co-creator of the National Science Foundation -- and an effective advocate for research done at universities. From the diverse writings Zachaery has selected, edited and introduced The Essential Writings of Vannevar Bush.
For the first time ever, the full breadth and depth of this American original can be read and reflected upon. Many of the 56 selections in this book are either long out of print or hidden in archives. While Bush delivers singular insights into understanding and managing technological change, these collected writings also display Bush's influence on conservative thought in the post-WW2 and Cold War periods deserves re-assessment. Many of the 56 essays argue for the central importance of freedom, individuality, self-reliance, ingenuity and sacrifice for the good of the nation, and the world.

For the past 40 years, G. Pascal Zachary has pursued questions about techno-science, globalization and the political economic of innovation. As a senior writer at The Wall Street Journal, Zachary published more than 80 page-one articles during the decade of the 1990s. His reportage for the WSJ first concentrated on Silicon Valley and, in the second half of the 1990s, on emerging aspects of globalization. He published two books in the decade: Showstopper, on the making of a software program at Microsoft, and Endless Frontier, a study of the life and times of the iconic engineer, Vannevar Bush, who as part of his duties as President Franklin Roosevelt's science adviser and chief innovation officer organized the Manhattan Project and laid the groundwork for the National Science Foundation. Both these books remain in print, and continue to be read and studied.

In the year 2000, Zachary published The Diversity Advantage, a socio-culture study of emerging forms of global capitlaism. The same year, Zachary was described by The Boston Globe as “the single most interesting journalist of all the [Wall Street Journal’s] 700-plus highly-talented reporters.” The Atlantic magazine, in a review of his writing career, deemed him a "public intellectual."

Within several months after the attacks on 9/11, Zachary departed the WSJ and went on to immerse himself in sub-Saharan African affairs, first as a journalist and later as a teacher and researcher. He traveled widely in the region and published widely on politics, culture and society, often through the prism of technology and agriculture. His efforts culminated in a three-year engagement with the Gates foundation, where he consulted chiefly on the revilutiion in African agriculture that he documented in a seminal essay on the subject which appeared on the cover of a 2008 issue of The Wilson Quarterly, a journal published by the U.S. Congress. Zachary'smarriage to Chizo Okon, of Port Harcourt, Nigeria, is the subject of his memoir, Married to Africa: a love story. Some of his varied writings on Africa, including key essays on the region's farm boom, are collected in Hotel Africa: the politics of escape.
Following his Africa years, Zachary returned to his earlier preoccupation with the past, present and future of technological change. In 2010, he joined the faculty of Arizona State University in Tempe, and spent 10 exciting years at the nation's most dynamic public university. While at ASU, Zachary received a grant from the National Science Foundation to study socio-political aspects of academic computer science in East Africa. He created a literary non-fiction graduate program; taught courses on the history of nuclear weapons and on the relationship of technology and consciousness for ASU's Honors College. In the spring of 2019, he received, along with ASU colleagues, support from a Templeton fund to study the role of spirituality and religion in digital innovation.

GPZ can be reached most quickly through email: g period zachary at gmail.com 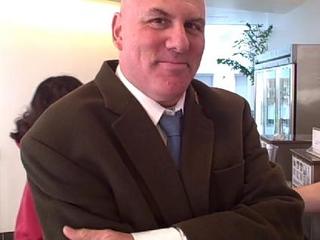 A Little Bit (More) About Me

G. ("Gregg") Pascal Zachary researches and writes about the past, present and future of technological change. His preferred language is the vernacular. While usually eschewing specialized language, he embraces scholarly and even esoteric vocabulary, and associated distinctions, when confronting the more complex aspects of techno-science and socio-technical complexity. He tells character-driven stories when possible, tyring to capture the human dimension of engineering, science, invention and discovery. His roots are in journalism; he reported on Silicon Valley in the 1980s for the San Jose Mercury and, in the 1990s, for The Wall Street Journal, based in San Francisco. In 1994, Zachary published a narrative techno-drama on the making of a Microsoft computer program (the book, entitled "Showstopper," in reference to the software "bugs" that could crash a program, was translated into Japanese, Portuguese, and Mandarin). His writings on the political economy of innovation, and the social and culture aspects of technological change and engineering research have appeared in Technology Review, Wired and the Atlantic. He wrote a column on innovation for the New York Times from 2007-2008 and for many years in the 21st century, he has contribued essays to IEEE’s monthly Spectrum magazine and to its flagship Website.

Some of Zachary's writing is animated by the history of technological systems. He emphasizes in particular the co-evolution between of war and national security and research and innovation. He has written at length about  the effect of World War II and the Cold War on technological change. He also gain sustenance from literary approaches to non-fiction writing, viewing history, personal essays, memoir and narrative non-fiction as equal partners in the literary enterprise in the English language. His singular concept of "masters of non-fiction," identifies common features of literary writing about science, engineering, political economy, history and the individual.

In the realm of today, of here and now, Zachary pays special attention to how developing countries both science and technology from North America and Europe and how these countries, especially in sub-Saharan Africa, "domesticate" technology and create distinctive approaches to techno-science and innovation. Zachary pays special attention to sub-Saharan Africa, a region he has visited 40 times. He is currently researching under a grant from the National Science Foundation the emergence of computer science in Uganda and he teaches a classes on science, technology and development in Africa in the Global Technology and Development (GTD) program at ASU. Zachary is the author of Married to Africa: a love story and Hotel Africa: the politics of escape.

Finally, Zachary's work reflects his life-long interest in the self in transformation, the nature of thought, the standards of truth and falsity, the meaning of life and the problem of good and evil. He draws on philosophy, anthropology and intellectual history in exploring what Hava Samuelson, a colleague of his at ASU, calls "the ultimate questions." Through qualitative research and creative writing, he analyzes new forms of identity engendered by the parallel forces of mobility, digital information-technologies and global migration (see his book, The Diversity Advantage: Multicultural Identity in the New World Economy). He has a growing interest in how computers and digitally-mediated experiences enrich and diminish cosnciosuness and authenticity. He is intrigued by advances in digital technology that might deliver new sources of creativity and problem-solving to both individuals and organizations. The potential for new forms of intellectual and psychological legacy -- which he has labeled "digital immortality" -- draws his attention along with the many varieties of disfunction, inhumanity and even immoral activities proliferating in the digital world.


Taken together, Zachary’s critical reflections, extensive field research and sustained writing across diverse modes enable him to bridge traditional scholarly and vernacular domains. He says, "The future of the human is fundamentally the terrain I care most about, but because of path dependence — of thinking and practice — we can never break free of the past. Yet radical leaps and disruptions are possible — and perhaps more likely — than ever.”

In 2020, Zachary completed a ten-year run as a professor in technology and innovation studies at Arizona State University. He taught undergraduates in the university's Barrett Honors College, notably two courses of his own design, "The Quest for Enhanced Consciousness, from the Greeks to Google" and "Nuclear Weapons and the Making of Modern America: 1940 to 1963." He also created ASU's Masters of Non-fiction program, which promotes literary writing about science, engineering and complex socio-technical systems. Prior to teaching at ASU, Zachary held appointments as a visiting professor at the University of California's School of Journalism and a lecturer in Stanford University's Department of Communications. He has guest-lectutred at many universities, most recently at the University of Nevada (Reno). In February 2020, Zachary was the keynote speaker at the National Science Foundation's public history conference.

Zachary is the author of five books: “Showstopper,” about the making of the Windows NT computer program (1994); “Endless Frontier,” the biography of Vannevar Bush, organizer of the Manhattan Project and architect of the partnership between science and the military during World War Two (1997); “The Diversity Advantage: Multicultural Identity in the New World Economy” (2000; revised, 2003); "Married to Africa: a love story" (2009); and Hotel Africa" the Politics of Escape" (2012).
Zachary is currently completing an edited volume of Vannevar Bush's Essential Writings, a companion volume ot his Bush biography.

In November 2000, Alex Pang, the singular historian of technology and professional futurist, penned a thoughtful meditation on my literary, journalistic and intellectial trajectory for the Atlantic Monthly.